Here are some more exercises from Jillian Michaels that are so difficult, they will purportedly end your life! What could be better?

She tells us this workout has three levels, “hard, harder, and just rude.” Each level is made up of four circuits, which are always a bummer because you always have to do everything over, as if you’re being punished.

Level One starts out cute, with something called Inchworms. I recall those little green caterpillars I used to play with as a kid, but there’s no time for daydreaming! Jillian gives one of her assistants a set of weights to make the routine harder, quipping, “you weren’t thinking it was too easy, did you? You wouldn’t be thinking that. Because that would always, always invite the devil, and the devil would be me.”

Level Two opens up with lots of jumping and kicking. My cats are underfoot, so great timing, guys:

We do the appropriately named, Sit Up Stand Up. That one’s really hard. I would make a joke about how it should be called Throw Up Give Up, but I’m much cleverer than that.

She tells us that “Level Three is that much harder than the other two workouts,” and she is not wrong.

To begin, we all audition for  Mummenschantz: 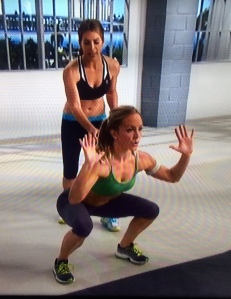 It’s apparent that none of these exercises are things you would find yourself doing in your daily life. Such as, a triangle rotation with a military press, which I refer to as Back the Ripper.

Then we have a plank with some dumbbell action, then a spin to the side. You know, I just don’t feel like doing that one, either.

Then, in the middle of the workout Jillian classes up the joint with a curtsey lesson:

The ominously named Hanging Mountain Climbers are next. And just look at how Jillian relishes the thought:

She wasn’t kidding earlier. Level Three is just rude. There’s nothing fun about it, and I find myself losing interest in having a deadly stomach.

Then I make the mistake of looking in the mirror and discover that this DVD has instant, magical results. Dammit, Jillian! That’s how she reels you in.