YOGA FOR “FEELING STRONGER EVERY DAY” 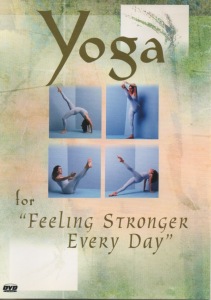 “As one celebrity known for her fitness regime said about yoga, Now I’m working out and working in!”

This was an actual pull quote from the back of the DVD. I don’t know how this could possibly be any more vague. This could literally be a quote from any celebrity. Maybe I’m the one who said it! Just kidding, no one knows who I am.

Also notice that the quote does not refer specifically to this DVD or this instructor, but to yoga as a general idea. It’s fun to make up blind item quotes. Here, let me try: “As one blogger has been known to murmur, Wow, my back hurts.”

I click on “Meet Yogi Marlon,” and we fade up on an empty chair in an empty room. Yogi Marlon does a full walk-on from offstage. She’s clearly practicing for the yoga talk show circuit, dressed in Dynasty cosplay in a shiny red blouse and black miniskirt. She strides in with the aggressive energy of someone who’s about to say “Sir, I need to ask you to leave the premises.” Instead, she talks for a long time about how yoga will make you a more peaceful person. She seems like she just pounded a Red Bull, so I’ll consider the source.

We transition to the workout, which, judging by the looks of it, takes place in the changing room of a Forever 21. Yogi Marlon wears her mic pack on the side of her ribs, so there’s a big weird square lump under her armpit.

Yogi Marlon makes a play to distract the eye from this angular abomination by wearing every piece of jewelry she owns. A very pretty necklace, bedazzled with baubles, hits her microphone and makes a clunky sound during Forward Bend.

Accompanied by music that’s coming through the wall of the building next door, Yogi Marlon spends a lot of the workout fussing with her yoga mat, which won’t lie flat because it’s on top of an area rug from Ethan Allen. The routine is blissfully brief, and I’m sure when the camera was turned off, the Forever 21 sales associate crept up to the curtain and asked, “Are we finding anything?”