First Impression: The back cover describes the host as a “Blissologist.”

Second Impression: Yes, and I’m the Queen of Sheba!

If this DVD doesn’t make you happy, there must be something wrong with you! Oh, we’ll just see about that (folds arms).

This program actually spans two separate discs, or as the back cover puts it, “Six point five hours of yoga!” Then I look at the insert, and it turns out each routine is a remix of the same ten chapters, over and over.  Perhaps repetition is the key to happiness? I decide to review the full routine, entitled Goin’ Big.”

We begin by kneeling before King Neptune: 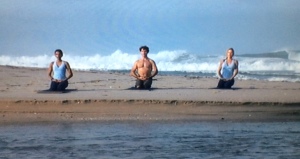 The warmup is nice and gentle for your back. The instructor, Eoin Finn, has a soothing voice that reminds me of the host of the S-Town podcast, which, hear me out, was the Tiger King of its day. Think about it. Eccentric Southerners on an elaborate compound. Outsize personalities. Animal hoarding. Tattooed hillbillies on drugs. Unplanned pregnancies. Legal entanglements. Murder – question mark – and unexpected deaths.

Suddenly, the sky turns chartreuse. The sea was angry that day, my friends.

Because all the segments were shot separately and slapped together, the time of day keeps jumping from one shot to another. It’s disorienting and also oddly comforting, because time has no meaning anymore.

Now Eoin demonstrates a Side Crow:

But I don’t bother to do the pose, because it wouldn’t make me happy.

Sometimes, the Yoga Man patter gets a bit nonsensical. “If you’ve ever touched a sea anemone, you’ve experienced when it shrinks back. Now try to find the opposite sensation in your own muscles.”  I have no idea what the hell this means. This is usually when I get told to “stop overthinking it,” so I decide not to listen to Eoin any more, because that would make me happy, la la la!

“Unfortunately, most of us have clubs for feet. But one day, through yoga, we will have enough dexterity in our toes to open up a door handle.”

Whatever, Eoin, you’re boring. It’s the 45 minute mark and I’m only halfway through this monstrosity. I pause the disc, clip one of my cats’ claws, and have a breakfast smoothie.

After intermission, the routine shifts to floor stretches, my favorite part of a yoga routine. Until:

The crotch of her yoga pants split and it is very evident in the shot right before this one. I’m not going to show that because I’m not a monster, but look at the tension in her face. This is not the expression of happiness.