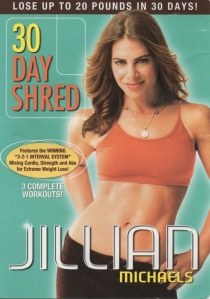 First Impression: She’s about to say either “you disgust me” or “kiss me you fool.”

Second Impression: And way to rock those Farrah throwback wings!

This workout promises that I can lose up to 20 pounds in 30 days, but I don’t think that’s a healthy or realistic way to approach fitness. So to make sure I’m not losing dangerous amounts of weight, I make sure to wolf down a generous portion of jalapeno cheese bread right after this routine. The system works!

These three, 20-minute sessions (which somehow take 90 minutes to complete) are good, old-fashioned circuit training with a constant rotation of cardio, weights, and abs to get your metabolism going.

A lot of the cardio involves jumping jacks, which I have to modify because I don’t want to hurt my Achilles tendons again. My living room floor is made of petrified wood on top of concrete and it’s not the best idea to jump around on it after a ONE MINUTE WARMUP. This is a real concern for me, guys. A friend had his tendon stitched back together by a doctor whose yacht is christened Achilles because that’s what keeps him in business.

Jillian Michaels maintains that “there is no modification for jumping jacks,” and I beg to differ. You alternate feet and don’t jump. You look very uncool doing it that way, but is Jillian Michaels going to bring you a sandwich when you can’t walk because your tendons are inflamed? She might, but she would yell at you the whole time.

She does introduce the DVD by bragging that she is “one of TV’s toughest trainers.” Of course, her onscreen persona was crafted for her by producers and doesn’t necessarily reflect her true self. I think they decided to make her “the mean one” simply because of her facial anatomy. She’s got a constant case of Angry Face and there’s not much you can do with that besides flare those nostrils and bark, “Pain is fear leaving the body!”