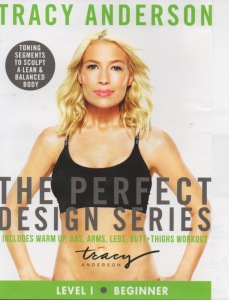 Second Impression: Nor should you! I forbid it!

We join Tracy Anderson in her exer-loft, in front of windows overlooking LA traffic to remind us of our own mortality. No matter how fit we are, both gridlock and the sweet release of death await us all.

Tracy is modeling a designer top with a built-in dangly cat toy and pantaloons by Hefty Bag:

Those shiny, elastic-waist pants ride quite low, and at one point I thought she was going to hitch them up, but then she actually pushes the waistband down from its already precarious location betwixt her hipbone and nether.

This is another one of Tracy Anderson’s mat routines done in her signature style: about an hour’s worth of mindless, repetitive calisthenics, “based on empowering all the small muscle groups and engaging those muscles to support the larger groups.” This explanation makes the workout sound very well thought out, but while doing these exercises, I’m rather skeptical.

We follow along as Tracy does a warmup, because Tracy instructs us to “just follow along” as she yanks her body from side to side. As well designed as she claims this workout is, her haphazard style really does come off as half-assed. Sometimes there doesn’t seem to be a pattern to the back-and-forth, left-to-right movements, so following along can be irritating. I try to copy what she does with her arms, but she randomly changes them around with every repetition. Then the voice-over chimes in that she’s doing that intentionally. Um, yeah, sure.

But wouldn’t you know it, immediately after the workout, my mirror tells me I’m the fairest one of all. Then Tracy Anderson appears in a cloud of green smoke and tries to make me eat an apple. I tell her I will have to peel it first, because I’m allergic to the skin.  “Curses, foiled again!” cackles Tracy Anderson. I open a window to clear the smoke from the room, and the mirror once again confirms the instantaneous, magical results of this workout. Despite my unending cynicism, The Tracy Anderson Method works like a charm.