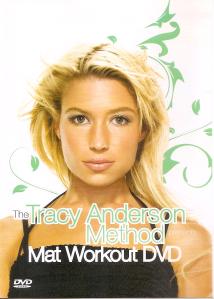 First Impression: Oh, this is the workout that Gwyneth Paltrow supposedly does every day.

Second Impression: The unfortunate graphic design choice on the back cover makes it look like Tracy Anderson is farting out Gwyneth Paltrow’s face in a square cloud.

I was excited to find this DVD at Goodwill, because I had heard how effective this workout is. Gwyneth Paltrow is indeed heavily involved in the branding of this Method, as evidenced by her face-in-a-fart-cloud, and a Special Features interview in which she smugly tells us that she makes time to exercise every day despite having two young children.

The instructions she did give caused me to raise an eyebrow. “ I really need,” she says, in the petulant tones of an Assistant Manager at Forever 21 lecturing on proper folding, “I really need you guys to do this workout four or five times a week.” She adds that she wants us to do her cardio DVD an additional two or three times a week and that she “really doesn’t want us doing anything else.” (Like, at all, or what?) Now it sounds like Gwyneth Paltrow is being held prisoner. A fit and toned prisoner.

Tracy Anderson also asserts that this workout is so effective that it will take any woman and make them look like a New York City Ballet dancer. I call shenanigans. According to the Natalie Portman documentary Black Swan, looking like a professional ballerina requires actually doing ballet 8 hours a day, followed by a refreshing yak in a fluorescent-lit corner toilet. Having a crazy mother also helps.

When I first tried this workout I was emphatically sure I didn’t like it. But it did give me magical, instant results, especially in the appearance of my arms. Darn it all! I go back to this routine every few weeks, dreading it beforehand and being very enamored with my arms afterwards.