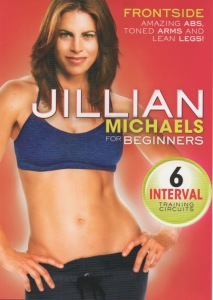 First Impression: Bathed in a halo of light, Jillian Michaels is the Angel of Fitness.

Second Impression: But is she a benevolent angel or a fiery angel?

Jillian Michaels appears in her signature super-low sweatpants that make me want to avert my eyes. Keeping that waistband locked in its position just above her lady garden seems to be a task far beyond the power of the humble drawstring.

We’re doing six interval training circuits against a plain white background, just like you have at home:

Jillian gives her instruction in a calm and reasonable tone. I’m confused – why isn’t she yelling or making fun of people? Oh yeah, this DVD is produced by Gaiam, the good people who brought you “Goat Yoga of the Pan Flute.”

In circuit six she berates her assistant Pete for messing up the mat. There’s that Jillian attitude that we know and some people love! But because she’s toned down her personality to satisfy her Gaiam overlords, it’s not funny or sassy, it’s just awkward and weird.

When we pick up weights to tone our arms, she refers to triceps as the “flabby waggy thing” and the “grandma arm thing.” Sigh. Can we not body-shame people in the middle of their workout? They are working on it! They are doing it! Also, leave Grandma out of this.

While on the floor doing shoulder flies with weights, my kitten climbs on my stomach to make sure I’m working my abs enough.

Then, when I lie down to do a plank, the kitty crawls up inside my shirt and hangs out in there. That means I have to hold the plank for a very long time because I can’t lower myself; it might crush her. I can’t really roll to one side and get out of it that way because she has pinned my shirt to the floor, effectively holding me in some sort of sweaty kitten death trap. I hold the plank for way longer than Jillian tells me to, because of course Save the Cat, which is a book I am aware of and may have actually seen on someone’s coffee table, but which I have never read.