First Impression: Put a star on top of the tree, the Yoga Zone way!

Second Impression: No, it’s not too early. It’s Thanksgiving Eve!

I worked out again to Gilad recently, and as fun as that was, my low back is now singing a protest song with many verses. I’m pleased to journey to the “quiet room” of a Burke-Williams Spa to reconnect with Normcore-clad yoga master, and secret werewolf, Yogiraj Alan Finger: 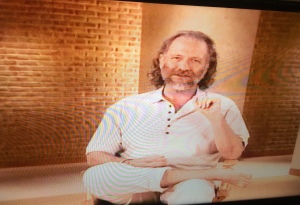 Although he dresses like a computer programmer on Casual Friday, the Yogiraj adheres to the yoga principle of all bare feet, all the time. The sight of old man feet in a state of dishabille fills even the most stalwart yogini with a palpable feeling of dread. But Mr. Finger’s feet are not hobbit-like, nor are they corn-ridden, nor are they yellow of nail. Nay, the feet of this yoga master are as pleasingly smooth and depilated as anyone could wish.

Naturally, a man with feet like this would employ Disney princesses to help demonstrate yoga poses:

While bluebirds help arrange the princesses’ hair, Yogiraj Finger endows us with his odd wisdom. “To build heat in the system, breathe like you want to clean your glasses.” Then he holds his palm up in front of his mouth and breathes on it, the way people do when they’re checking to see if they need a mint. One of the princesses follows suit:

Yogiraj Finger guides us in “stretching out your hamstrings between your knee and your sitz bone, releasing unconscious suppressions locked in that area.” Ugh. I find it really difficult to smile and nod when people says things like “women store resentment in their hips,” or “lack of symmetry in the face denotes issues with your parents.”

None of this pseudo-scientific woo woo is ever positive or encouraging. If someone were to say to me, “your unsightly, floor-scraping bunions signify your ability to tread lightly on the feelings of others,” I would be delighted.

Like Loading...
This entry was posted in Reviews and tagged 60 minutes, abs, relaxing, strange, talky, yoga. Bookmark the permalink.