First Impression: Jillian Michaels wants us to work out 5 days a week and eat healthy.

Second Impression: That’s why I only exercise with vegan white cheddar chickpea puffs in my mouth.

Level One begins with the discovery that one of Jillian Michaels’ helpers is secretly Anna Paquin, eager to get back in front of the camera since her vampire show ended:

And if you think that Jillian Michaels looks like she is about to steal fitness model Bashira’s soul, you are not wrong:

We work though a circuit of burpees, side bends, and something ominously called Prisoner Lunges.  Then we get down on the floor for Long Lever Crunches, and my little cat offered motivation by climbing on my stomach and meowing at me. Then my big cat decided to join the party.  How’s a cat mom supposed to get jacked and shredded with so much cuteness going on?

Having completed two circuits to Jillian’s satisfaction, she demands,  “Let’s take a moment to really contemplate what you’ve done,” which is usually what you hear right before you are locked in your room without supper. Maybe that’s part of her sensible eating plan?

Level Two begins with the evil stepmother of fitness, Jillian Michaels, declaring, “I’m determined to kill one of these girls today. A trip to the hospital is something I have not yet done to a dancer, but it’s not beyond me.”  OSHA, is this ok?

We do some lunges and Repeater Knees, then we move on to the Lighthouse. This is where you swing a weight back and forth like a beam of light searching for the truth. It reminds me of the French horror series, Marianne, set in a sad little fishing village.

As if possessed by an ancient Gallic witch, Jillian once again targets Secret Anna Paquin with her wrath, jabbing her finger into the young lady’s stomach in a manner that seems neither professional nor consensual:

Next, she grabs and forcibly rotates Bashira’s hips, who lets out an obvious cry of pain:

Addressing those of us at home, Jillian asserts, “Know that I am always watching you. Kind of like a horror movie. Isn’t that right, Bashira?” 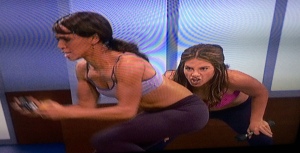 I guess that’s the last time these dancers play with a Ouija board in the green room.