First Impression:  Ain’t no party like a Supersweatin’ Party.

This DVD is the most fun I’ve had doing an exercise video in a good long while. It’s a solid 50 minutes of Grade-A Wisconsin Cheddar, which, by the way, my doctor recommends I cut back on.

This DVD is all about the 80’s, and it does not disappoint. We find ourselves in a shopping mall, plucked right out of America’s tackiest decade and deposited directly into a sound stage. There’s a sea of side ponytails, off-the-shoulder tops, fluffy tulle skirts paired with boots, and boxy polos. There’s also a time traveler from the early 2000s, in those low-slung striped bell bottoms that looked good on like, four people.

Richard Simmons brings every bit of his enthusiasm and stagecraft that we know and love him for. He first appears in an electronics store display, demanding from a TV screen that we all get together and sweat!  Then he emerges, and all the passersby gather into aerobics formation in the food court. As an imitation Whitney croons the lyric, “I wanna dance with somebody who loves meeeee,” Richard leads a bit of choreography that looks like a heart beat, shouting at the camera, “This is for you!”

Some rhythmic gymnasts leap past with ribbons on sticks, and Richard greets them with a surprised, “Oh, hello!” as if he didn’t know they’d be dropping by:

A ersatz brunette Madonna joins the group, lip syncing to “Like A Virgin:” 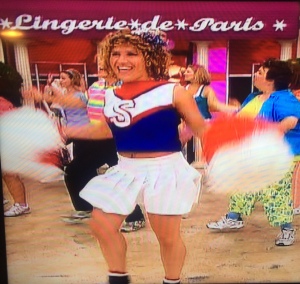 And who can resist bopping along to “Shake It Up?” Certainly not two spirited sailor-waiters in the background. Oh, please let them come up and dance, I wish fervently with all my might. Well, they do!  One at a time, they come up to the front and do an awkward hip-thrusty thing at Richard, who gives them the stink eye:

Look how sad they are!  Don’t be mean, Richard! They remove their waiter jackets and try again, showing off some sick tattoos on their jacked arms. This time, Richard lets them join the fun.  That was a good thing you did, Richard.