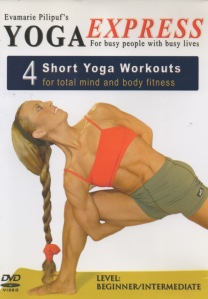 Second Impression: I mean, it takes a lot of upper body strength to climb out of a tower.

The Pony Express existed for 18 months between 1860-1861. A pouch of mail traveled on horseback, changing horses every ten miles, and reducing the amount of time it took for messages to travel coast-to-coast down to ten days. Ten days! That’s what “Express” meant in 1860.

But lucky for us, on this DVD, “Express” means anywhere from 10 to 25 minutes, so no need to cash in your vacation time for a ten day workout. Sorry, bad joke, no one has a  job with vacation benefits any more.

These four routines are hosted by yoga instructor and Harry Potter background character Evamarie Pilipuf.  She greets us in front of a gigantic fireplace in the Hufflepuff tower: 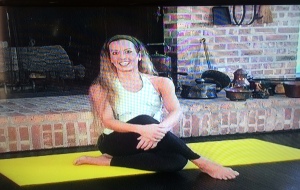 The introductory montage is a series of quick cuts of home videos of Evamarie Pilipuf doing some very unusual exercises in the outdoors, such as weightlifting in a skirt and doing yoga in a ribbon-festooned ballet costume: 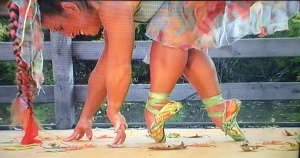 I’m not sure why Evamarie Pilipuf chose this outfit; satin doesn’t exactly breathe. This delightful, yet confusing display is accompanied by the rhythmic banging of sticks that gets us pumped up and excited for some yoga, done Express style!

Well, it turns out it’s a good thing that the routines are short, because we start off with Twisted Crescent, which might as well be called the Ankle Dislocator. I just can’t balance on the ball of my foot while I’m twisted around like that. Or maybe I’m not flexible enough. I’ve been accused of worse.

So why did the Pony Express only last for 18 months? On October 24th, 1861, the transcontinental telegraph was established and messages could be transmitted instantaneously. At the same time in history, mediums were increasing in popularity as they sent and received instant messages from the spirit realm. Which was more interesting, a telegraph office or a medium’s seance parlor? That’s a different fitness video.

Like Loading...
This entry was posted in Reviews and tagged abs, folksy, strange, under 30 minutes, yoga. Bookmark the permalink.