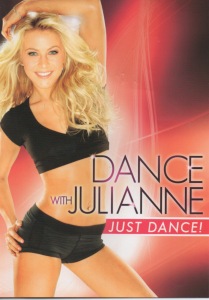 First Impression: Julianne is leaving room on the right side of frame for someone special.

Second Impression: That somebody is you!

The workout is divided into three routines, Flaunt It, Work It, and, since I can’t remember the name of the third one, let’s go with Whip it Good.  We start all three routines with a head-to-toe Dancer’s Warmup™. I really have to point out that every time a thrift store DVD begins with a Dancer’s Warmup™, it’s not a very thorough warmup at all. We start with lots of whipping our head around, and it’s just downhill from there. There’s some thrusting back and forth with the ribcage, a bit of hasty attention paid to the calves, and we’re ready to Just Dance™!

Dancing with the Stars™ own Julianne Hough leads us through the choreography on a set that at first glance, looks like an actual dance studio. It’s a big empty room with ballet barres all along the walls… and hold on a second, there’s no mirrors. Clearly, Julianne has a phobia about haunted mirrors, that must be catered to if we are to put superstition aside and Just Dance™.

Free from the curséd sight of her own reflection, Julianne gets to work, shouting instructions as if she doesn’t trust her body mic to do its job.

Julianne tells us to watch her backup dancer Jasmin for modifications. Jasmin never breaks eye contact with the camera, with a knowing smirk that says, “I am a sooo much better dancer than this.”

We do a move where we kind of pop our hip to the side, and Julianne yells “Sit!” like she’s training a Rottweiler. When we do a move called the Bird, she cries out “Caw-caw!” You see what I’m dealing with here? Jasmin’s raised eyebrow seems to say.

At the end of the routine, Jasmin pulls the curtains away from the mirrors with a triumphant cry, and the Unspeakable Void sucks in Julianne, the crew and all their equipment, and the sound stage itself. All that is left is the dark goddess that is Jasmin, beautiful and cruel, laughing into the emptiness. Then we do a cooldown, which may I say, is rather inadequate.