KICK TIME! FUN AND FITNESS WITH KIRBY THE CLOWN AND THE KICK TIME KIDS 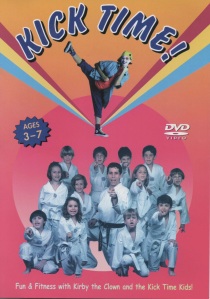 2005, $1.99 (in the original shrink wrapper!) at Goodwill Superstore on San Fernando

Long-time readers may remember I posted a review of this gem two years ago. In brief, Kirby the Clown, lonely and desperate, spies on a children’s karate class and is rewarded for her bad behavior by being allowed to join the class herself. 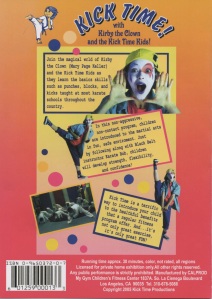 Well, I passed the video along to a family with a 10-year-old, and hilarity ensued. I texted his mom to see if he would like to write a guest review, and he immediately grabbed her phone and typed the following:

Hi it’s Dexter and here’s my review on Kick Time.

I liked how the writers incorporated a story element to it. But I think it would give off a bad influence to kids because at the start of video Kirby the Clown snuck into the class before it started, in addition to that that the age range this is targeted at is in the age range where kids can’t differentiate make-believe and reality.

They also didn’t bow before class. The kids didn’t keep their guard up.

Oh, and my mom punched me in the neck by accident.

But I can see lots of kids doing it.

At this point I texted back to say I had gone to bed already. Because I am so world-weary that my bedtime is earlier than a 10-year-old’s. I never did get the full story of the accidental neck-punching, but I’m certain it was epic.

Like Loading...
This entry was posted in Reviews and tagged calisthenics, for kids!, guest reviewer, martial arts, title has exclamation point!, uncomfortable banter, under 30 minutes. Bookmark the permalink.