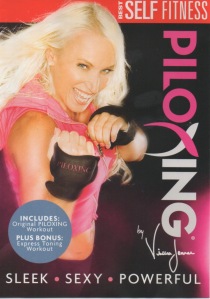 First Impression: I got you a present!

Second Impression: It’s a punch in the face!

The DVD case shouts that Piloxing will make me SLEEK, SEXY, and POWERFUL, but I will settle for FIT and HAPPY.

Piloxing is a blend of Pilates with Boxing. I cannot imagine what these two exercises have in common. Before we begin, let’s imagine some other portmanteau-worded exercises, shall we? Such as: Roller Kayaking, Footballroom Dancing, and Karatennis. That last one’s a thinker.

Piloxing was invented by Viveca Jenson, a former captain of the Swedish Bikini Team. Her hair was damaged in an unfortunate bleaching incident, and now it’s that shade that only looks good on Marilyn Monroe, or Norman Bates’ mother. 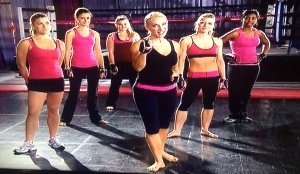 The set has an unused boxing ring with pink ropes. We’re not actually going to like, hit each other, because this is L.A., and the collective amount of porcelain veneers in any given room costs more than a Mercedes.

Viveca Jenson says she created Piloxing to empower women. Coincidentally, the stated goal of the recently-dismantled Nxivm cult was to “empower women,” but they branded members with the cult leader’s initials instead. So now the words empower women make me look askance. If there is even a hint of flesh-burning in this DVD, I’m out of here.

We start the workout, and it feels a lot like Tae Bo mixed with Hip Hop Abs, the Tracy Anderson Method, and of course, the Pussycat Dolls Workout. I would say the closest we get to a true balance between Pilates and Boxing is when we do a speed bag while simultaneously lifting a pointed toe: 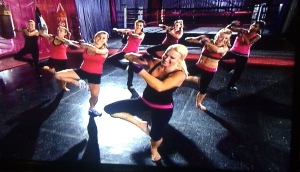 If someone can tell me about a real world situation where this skill would come in handy, I’d love to hear all about it.

While in a plié we make an overhead cowboy lasso move. “Sexy! Fun!” cries Viveca Jenson. I’m not sure why miming a lasso inherently implies sexy fun, but this is something for us to unpack in my new deep dive podcast, “What The Hell Are People Doing?”

In the end, Viveca Jenson concludes, “Femininity is about being sexy and feminine and it’s all combined and we are.” I couldn’t have said it better myself.