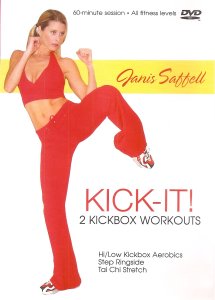 First Impression: This is how you mount an invisible horse.

I think this may be the first exercise video I’ve reviewed that was actually shot in a gym, and it’s soon apparent why. The sound is echoey, the concrete walls are depressing, and the large window has been draped with cheesecloth that almost hides the office building next door.

During Janis’ introduction, there are some dudes in the background, sitting on the floor of the gym, with their backs against the wall. It looks like they refused to get out of the shot and so the camera just rolled with them sitting there.

I would say the most annoying part of this video is the steadicam footage they intercut with A Camera, always at the worst possible time. Any time Janis shows a new move, they cut to a steadicam shot of someone’s face. Then when they cut back to the main shot, I can’t follow the move because they didn’t show how to start it. Sometimes the steadicam footage has a strobe effect on it, because it’s best to exercise with a headache.

I find that the first routine is hard to follow and not very fun. There are three patterns to the routine, but I can’t seem to find a pattern within the patterns, know what I mean? It just isn’t easy to pick up. Then she has us do all three patterns twice in a row, which makes me feel completely lost, as well as bored.

The second routine features a step, with the option of using a partner. Part of the routine involves circling around your partner and punching at their head while they duck out of the way. I suppose this could be useful if there was some underlying tension in your relationship. However, if you’re with someone that you want to punch all the time, well, I suppose you need to ask yourself some hard questions.