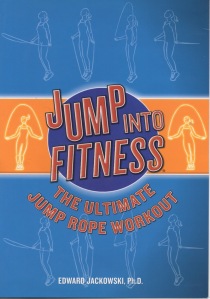 Second Impression: Made a mistake, kissed a snake, how many doctors did it take?

This is not so much an exercise video, as something to be entered into evidence. The set is a basement room lined with IKEA balsa wood and paper folding screens. It feels like the beginning of a found-footage horror movie, where the terror lies just underneath the banal.

Edward Jackowski, Ph.D is going to mansplain to a roomful of grown women how to do what little girls can figure out on the playground all by themselves.

Edward, who looks and sounds like a Legitimate Businessman in the restaurant supply business, drones on and on about all the finer points of jumping rope. The women have been made to sit on the floor around him, like children.  He tells them that jumping rope is the only thing that gets rid of cellulite. He repeats this several times, in an effort to cement their interest. Because that’s the only thing women really care about, amirite ladies?

Sidebar: I looked up “what gets rid of cellulite,” and there are so many different answers, that’s it’s pretty clear that nothing really works. Although, sleep and hydration seem like two key factors, so take what you like, and leave the rest.

Edward pulls Alice up off the floor, calling her “Atta-girl.” He pokes at her arms, back and butt, telling her jumping rope will get rid of “all this back here on the back of your arms, and all that business in the saddlebag area.”

You, Sir, are not a gentleman.  After body-shaming poor Alice, he says that jumping rope will, among other benefits, “give yourself a feeling of a better self-positive image.” There is a silence, during which Alice regards him with white-hot contempt underneath a thin veneer of feminine charm. Her gaze speaks volumes that he is unable to read. “I can’t wait,” she quietly says, without kicking him in the balls. She is my spirit animal.