First Impression: “Where’s my other foot?”

Second Impression: “It’s behind your head!”

We start with Yoga in an Hour, led by Tara Stiles, the High Elf of Yoga: 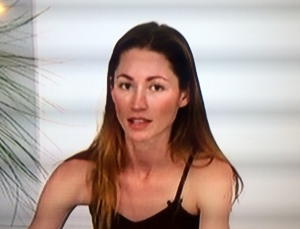 Tara shows us a backwards wrist stretch, how to do a Vinyasa with gallons of lustrous hair flopping everywhere, and a dainty technique for plucking your tiny shorts when they ride up and get crammed into your ass crack.

Next, quoth the DVD case, “Tara takes it to the streets of New York, testing your talents with what only can be described as Yoga Art.”

And when I say “unwashed,” I mean that she’s doing yoga barefoot outside in New York City. The concrete has been peed on, and also has herpes.

Here’s Yoga in the Park:

Oh, good. Crow Pose. Let’s get really close to the cobblestones that a Great Dane has shat upon:

Let’s move on to Yoga on the Rocks: 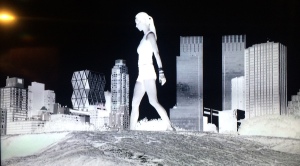 The image pulses between black-and-white and color, as if doing a side plank at an obvious murder scene isn’t weird enough. From this angle she can get a good view of the dead body:

Let’s get a closeup of the precise moment when she contracts ringworm:

And, apparently, the perfect place for Central Park Yoga is the tunnel from every Jodie Foster movie where a horrible crime is committed:

Mercifully, we’ve made it to Flat Iron Yoga. She actually has a mat for this one. Why start now?

This is the face of someone who regrets having the idea to do yoga near a busy intersection:

Someone barfed there like, thirty minutes ago, Tara. I hope you keep Wet Ones in your purse.