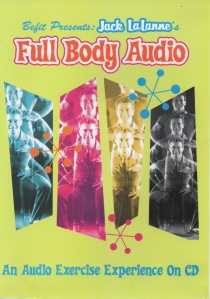 First Impression: An audio exercise program? How does that work?

Second Impression: Yeah, they aren’t kidding. This is what you’re looking at the whole time: 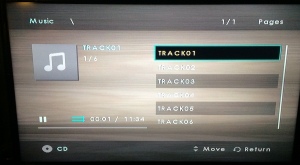 These six tracks are excerpts from the Jack LaLanne Show, a fifteen-minute TV program that premiered in 1953. It’s older than Disneyland, kids! 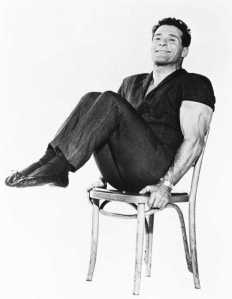 Jack’s instructions for each session are underscored by live organ music. Imagine “The Lady on the Flying Trapeze” mixed with “Buffalo Gals,”  and we’re really getting in the mood to work out now!

The first track is patronizingly called Help For Your Face And Neck. After reminding us the “the mirror doesn’t lie,” Jack instructs us to puff out our cheeks, then suck them in again. “It’s important for those of you who are reducing,” Jack nudges us, signaling the onslaught of body-shaming yet to come.  I am shocked, shocked. An exercise program from the 50’s aimed at stay-at-home mothers, full of sexism? Can you believe it?

Next, Jack offers Help For Your Chestline.  “Hello students. Now more than ever before there’s an emphasis on having a nice appearing bustline.” Oh, Jack Lalanne, you sweet summer child. From your 1953 perspective, you cannot possibly forsee breast implants, bras that inflate with water, or the dress Jennifer Lopez wore to the 42nd Grammys.

After telling us to lift a book in each hand, Jack cannot resist getting in a few digs. “You girls that wear your halters a little too tight, it cuts off the circulation and makes the muscles weaker and only accentuates the problem.” When he says “halter,” is he trying to avoid saying “brassiere” on the air? Also, back then, this what what women wore:

It was that, or go braless in public and be taken away for electroshock therapy. So don’t be criticizing women for not having choices.

Moving on to Help For Your Waist. Because if you didn’t need any help, you wouldn’t be here, would you?

“Pull that waist in, give me a smile, and let’s march!” At this point I really wish the workout had a video component, because a grinning man in a jumpsuit marching next to an organ is what the world needs right now.

Then we get to Help For Your Hips. “Remember this – the tape measure doesn’t lie,” Jack reminds us, chiding, “Women today wear form-fitting clothes.”  Here’s an interesting historical perspective. We think people back then were so thin, but body shaming was even more rampant, and they even had the slenderizing advantages of smoking, a martini instead of lunch, and no high-fructose corn syrup.

Jack doesn’t let up. “Here’s some leg lifts to target that secretary, or homemaker spread.” Yes, Jack. Because those are basically the only two things a woman could be in 1953. Can you blame us for eating our feelings?

Help For Your Thighs starts off with some lunges. Jack opines, “So many people have thin knees or fat knees, and this will help your knees be just right.” Yes, they will be the knees Goldilocks would choose! Apparently, I need to be self-conscious about my knees now, but Jack still isn’t done.

“Here’s another problem part of the anatomy, especially with women. The flabby (pause pause pause) back of the leg. That is the problem.” Is it the problem, Jack? Or is the real problem conflating skinniness with health?

Jack has us run in place at the end. “Not as much fun as running up bills, but it’ll do,” he quips. Wow, a “women be shopping” joke in 1953. That’s hilarious, considering a woman couldn’t have a bank account in her own name until 1975.

Finally, we get to Help For Your Legs. We do “toe stretches for women who wear shoes that are too tight,” because apparently women can’t do anything right.

Jack enthuses, “this is excellent for you gals who wear high heels too much.” Because that was the only acceptable kind of shoe for women to wear, Jack! If you left the house in sneakers, you’d be called a Communist and stoned to death in the town square like in that documentary, The Lottery.