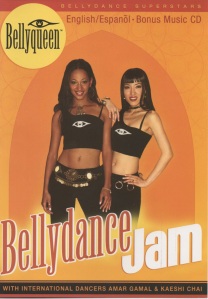 Second Impression: Bellydance Jam is part of your complete breakfast!

Bellyqueen are a belly dancing performance duo made up of a former Ms America and champion Ms World of Bellydance. They look like supermodels and are styled like a magazine about perfect human beings. Yet someone thought it was important to Photoshop the cover picture of these two impossibly beautiful women down to their birth weight. I don’t understand.

There’s a bonus CD of Middle Eastern music that you can practice along to as well as the instructional DVD. So I popped in the disc that was NOT labeled “Bellydance Jam Music,” and music started to play. I quickly learned that the routine is labeled music, and the music is on the disc that says “InterGalactic Bellydance Galactic Caravan.” Got it.

The warmup and instruction are well organized and presented. The ladies show us how to shimmy, body roll, and circle your hips in a tiny studio that is lit with orange gels. You can see the lighting rig in the frame, so you can pretend you are up on a stage with world bellydancing royalty. Then you can make-believe that you are sabatoging them by rolling ball bearings on the floor. Welcome to the high-stakes world of competitive bellydancing, Little Dove!

We learn a short combination that you can take out to the club, and then we are magically transported, using a lighting change, to a nightclub! Bellyqueen break out their moves with some gal pals, who have all agreed to wear crop tops and bell-bottom jeans on their girls’ night out. Some background dancers undulate behind them, partly hidden by a Party City smoke machine. No one in the club approaches the ladies to tell them they’d be attractive if they only had a tan, or to ask who owns them (personal experiences I’ve had.)

It’s a shame we can’t see the extras clearly though… there is a Steampunk dude in a corset-vest and a bowler hat who is dropping it like it’s hot, and he really needed his own close-up.

Like Loading...
This entry was posted in Reviews and tagged 60 minutes, abs, dance, exotic, telepathic instruction, trendy. Bookmark the permalink.