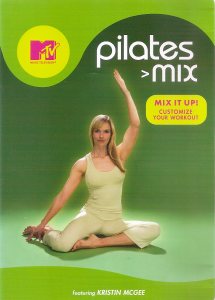 First Impression: This is a Statue of Liberty Halloween costume that went completely awry.

Second Impression: Give me your tired, your toned, your huddled masses yearning to be fit…

Kristin McGee is the same instructor that co-hosted BODY BY BETHENNY with Bethenny Frankel. But in this video, she’s her own woman; she doesn’t have to laugh sycophantically at a reality TV star’s jokes. It does appear that her breast implants are attempting to escape through the armholes of her tank top, but she remains unfazed.

This DVD has two different workouts on it, and they are very similar to one another. They’re like identical twins that have gotten different haircuts but still get mistaken for each other. You can mix up and recombine different parts of the routines by selecting them in a menu, but I have to say, it doesn’t make the workout any better or worse, just a little bit different.

Her helpers are arranged in a circle, fanning out on the floor like the petals of a flower. This sounds very lyrical and delicate, but it really means that the person assigned to demonstrate the modified version of the exercise is never on camera when you need to look at them.

There’s lots of cross-cutting camera work, and during the second routine one of the camera operators gets caught in another camera’s shot for a reeeeeally long time. He looks like the Comic Book Guy from The Simpsons, and it is priceless.

I don’t know what MTV has to do with fitness or exercise, but I’ve also heard they have very little to do with music videos any more, so it’s anybody’s guess. Their contribution to the exercise DVD genre is to produce something that moves so fast that you can barely follow along.

Kristin whips from move to move so quickly, that by the time I reposition myself into the pose, we’re halfway through and ready to transition to the next bit. It’s kind of annoying if your natural flexibility or pain tolerance is less-than-ideal. You might need a minute to comfortably and safely move from one extreme to the other. It would appear this routine is ideal for twenty year olds who have never known pain or difficulty in their lives… hey! I guess MTV is right on target with the demographic after all.

Like Loading...
This entry was posted in Reviews and tagged 60 minutes, abs, challenging, corporate, Pilates, trendy. Bookmark the permalink.