First Impression: Look how tiny she is on the cover!

Second Impression: But the clip art of boxing gloves and Yin-Yang watermark are on point.

Well, looky what I just caught in the internets!  Apparently in 1991, one Ms Fairlie Arrow, Australian nightclub singer, faked her own kidnapping so she could hang out in a hotel for a few days.  Seven years later, she’s hosting a fitness video, shot on location in Nashville, Tennessee. You really can reinvent yourself if you want to! 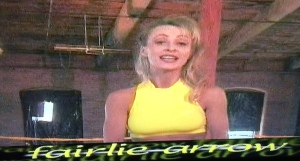 We could dwell on that all day, but instead, let’s firm those abs, work those glutes, and violate OSHA regulations with Fairlie Arrow, forgotten Harry Potter character and kidnap pretender.

Welcome to the Dingy Crapshack. Can you smell the mold?

We begin the Basic Workout. Fairlie is unashamed to be wearing leggings made of melted crayons, or of anything else she’s ever done.

The vantage point occasionally switches to security camera footage, which gives a sense of paranoia and isolation:

Or maybe they’re just keeping an eye on Bellatrix Lestrange, who escaped from Azkaban Prison to squeeze in a workout:

The workout itself is a ho-hum series of punches and kicks. Fairlie punctuates every instruction with an abrasive “C’mon!” I absolutely hate that. I’m already here and doing the thing. What more do you waaaaannnnt?

Here is the least helpful camera angle ever:

However, it does provide a great view of the garbage bags covering the windows.

For the Advanced Workout, Fairlie has changed into Poison Ivy cosplay:

It looks like they actually brought in lights for the second routine. Good job! Incidentally, I can’t decide if the scaffolding in the background is a misguided attempt at an edgy set design, or indicative of a dangerous worksite. “C’mon!”

We do a series of fast punches plus a slow kick. This odd rhythm is confusing and upsetting to Fairlie’s helpers.  Maybe the ghost child lurking behind them is giving them bad energy. 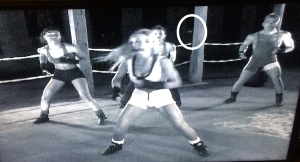 Fairlie tells us to really visualize our opponent when we punch. “Jab to the nose, cross to the chin, hook punch to the side of the head.” Maybe imagining hitting someone who wasn’t really there got her through the ordeal of pretending to be kidnapped.

To finish up the routine, we hop on one foot while flicking the other like a dog with a sticker on its paw pad. Who’s a good boy? C’mon!

Almost too late, I notice one of her backup boxers is precariously close to the edge of the raised platform without a safety rope behind him. 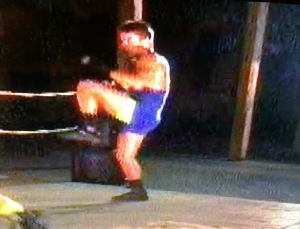 Thankfully, the workout is over. Roll credits! Are you wondering who might claim responsibility for the odd camera angles?

Hmm. What about the lighting?

U-huh. And who might have created this awesome graphic design? 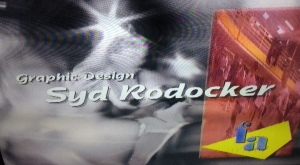